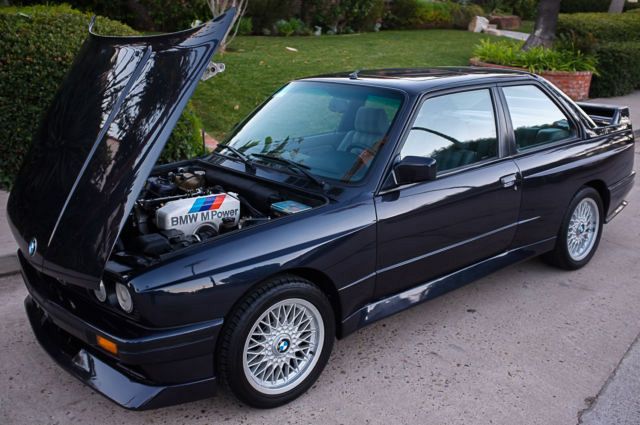 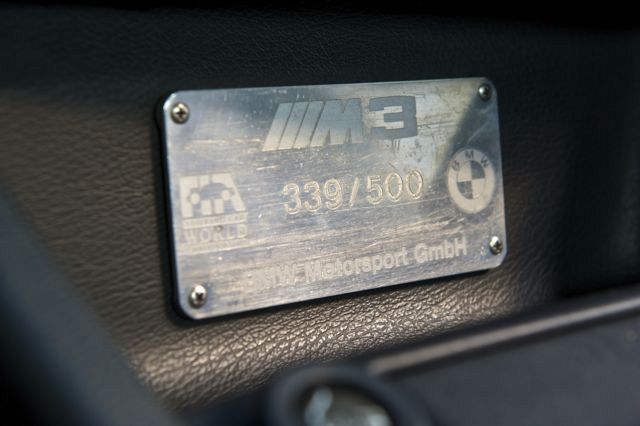 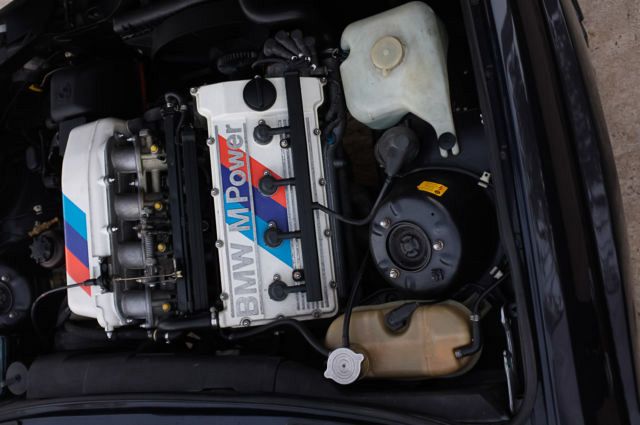 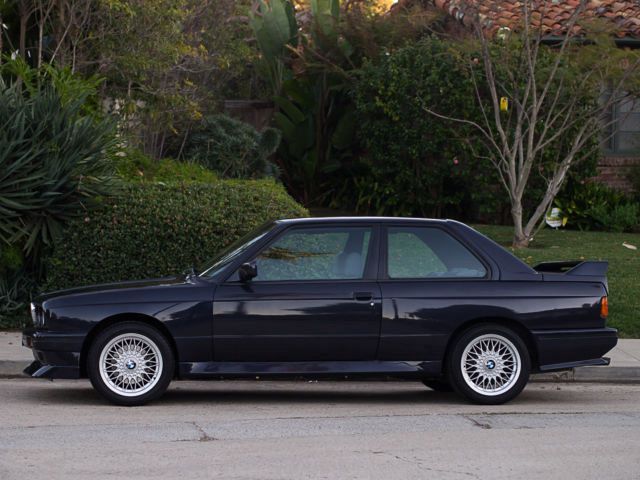 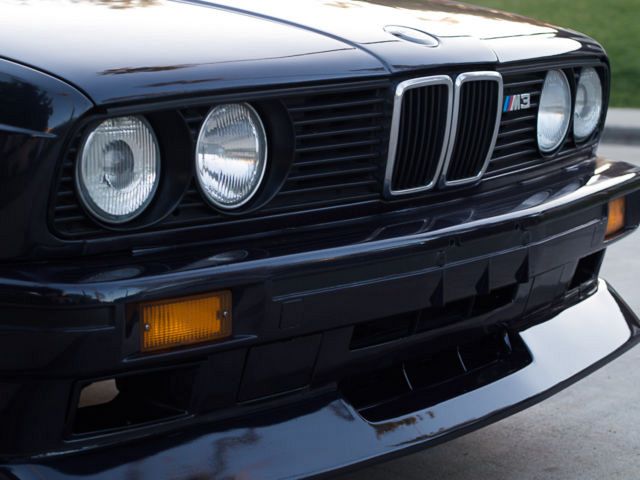 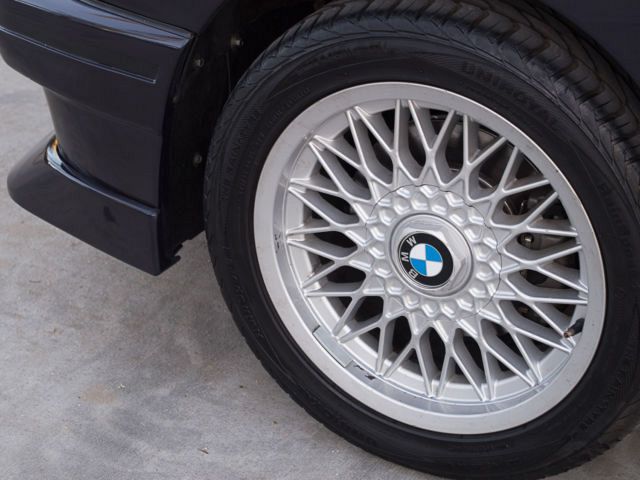 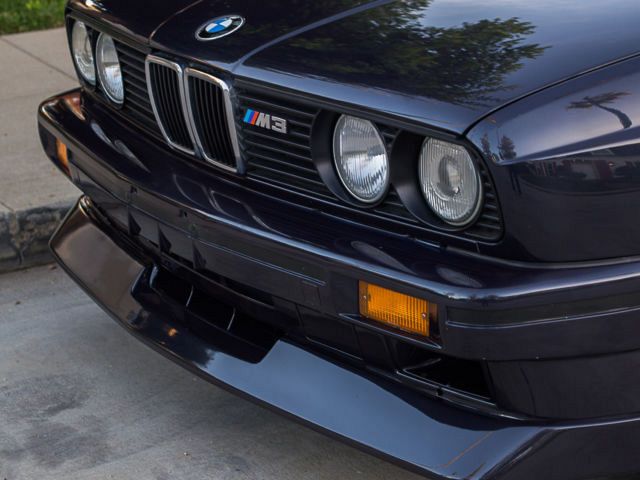 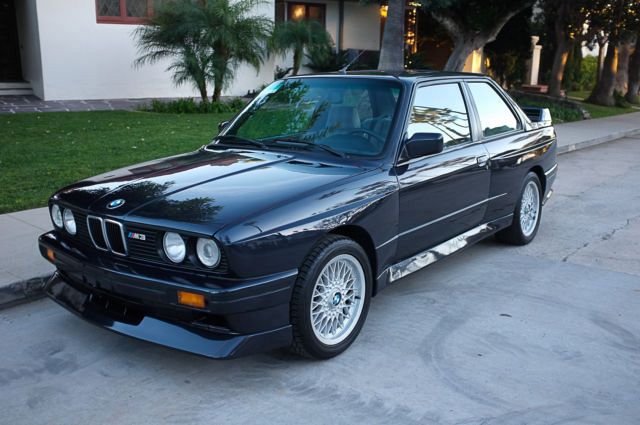 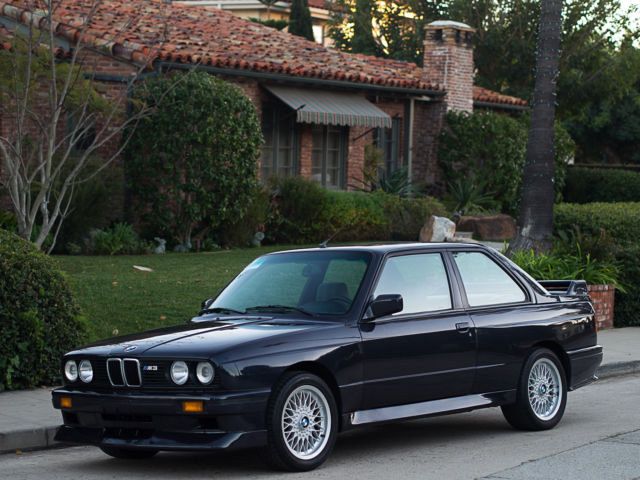 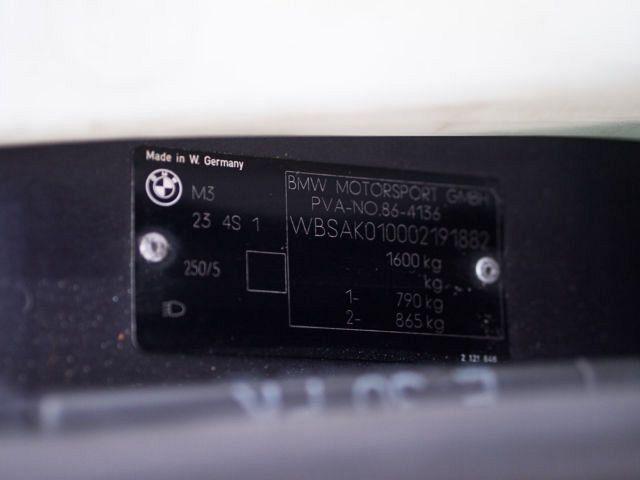 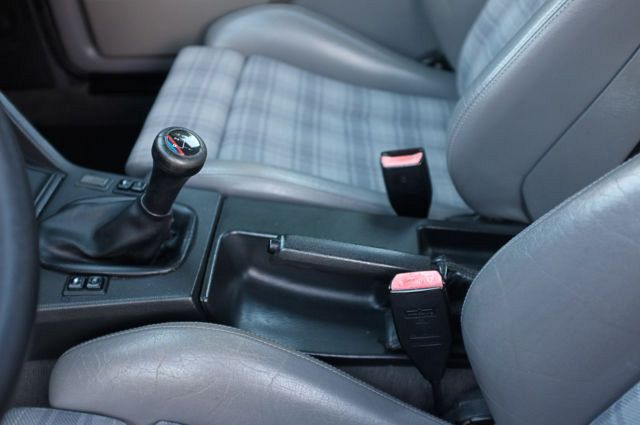 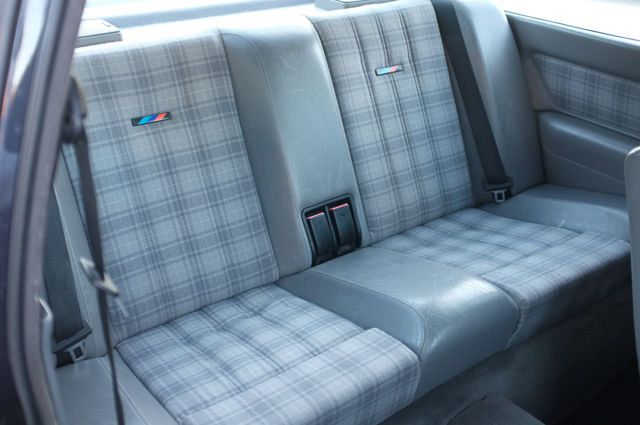 Hi. his is one of only a few EVO2s in the United States. The M3 was homologated for DTM and they had to make 5000 production cars to do so. They needed up making 19. 00. But every year in racing things improve. engine. aerodynamic etc. so if manufacturers want to incorporate those changes they don’t have to make another 5000 production cars. only 500. These are EVO models. and this car is the EVO2. It has a unique engine putting out 220hp with higher compression pistons. bigger cam. manifold. and engine management. The engine is also uniquely painted motorsports colors of red. white and blue. In addition there is a lighter flywheel. unique front and rear spoiler. and lighter bumpers and trunk reducing weight 22 pounds. It also has larger 7. 5×16 EVO wheels. The interior is unique to the EVO2. with plaid cloth centers and leather bolsters. There is a plaque with the number of 500 EVO2s. door sill plates and footrest. They interior is unlike any other M3. This EVO2 went through a cosmetic restoration in Europe before I purchased it. But once I brought it to the US. I did a full suspension restoration. tuneup. brakes etc. and had any issues with the beautiful Macau Blue paint dealt with and had the car detailed. It is now in excellent condition. mechanically and cosmetically. I did not do anything to the interior. which is in good condition for its milage. These EVO2s are almost impossible to find now. In the last year and a half they have been gobbled up by collectors. The last one I saw for sale about a month ago was 89. 00 euros or about $105. 00. It had 145. 00km and this one has 157. 00km. I have included a screen shot below. Here is a description of the EVO from the M Registry:What distinguishes an E30 M3 Evolution II?The E30 M3 Evolution was followed by the E30 M3 Evolution II. 500 of which were built in the Spring of 1988. (NOTE: This model is officially known simply as the “M3 Evolution”. since BMW M considers the 505 examples of the first M3 Evolution produced in 1987 as a slight variation on the regular M3 and not a separate edition in its own right. ) Unlike the first Evolution. the E30 M3 Evolution II received significant mechanical upgrades to its S14 motor (identifiable by unique valve covers in white with tri-color Motorsport stripes). New pistons raised the compression to 11:1 (from 10. 5:1). the air intake was improved. the flywheel lightened and the engine management revised. Power increased to 220 hp and 181 lb/ft of torque. both at the same rpm as the standard non-catalyst S14 motor. The close-ratio Getrag 5-speed manual gearbox carried over unchanged. though the final drive was reduced slightly from 3. 25:1 to 3. 15:1. Larger 7. 5×16-inch alloy wheels with 225/45ZR16 tires. normally an extra-cost option on the standard M3. were fitted as standard to the Evolution II. However. there were no alterations to the suspension or brakes. The exterior of the Evolution II can be easily identified by its deeper front airdam. additional rear lip spoiler on the trunk lid and front brake cooling ducts in place of foglights . In addition. thinner window glass. plus a lightened trunk lid and bumpers. reduced weight by 22 pounds. The E30 M3 Evolution II was offered only in three exclusive exterior colors: Misano Red (236). Macao Blue metallic (250) and Nogaro Silver metallic (243). The sole interior choice was Silver cloth with matching leather bolsters. Both the front and rear seats were fitted with the tri-color M lapels (as used on the E28 M535i/M5). plus an M foot rest and door sill plates with the “M3” insiginia were included. Finally. a special dashboard plaque denoting the specific number of each example out of 500 was fitted to every Evolution II. All features from the normal M3 option list were also offered on the M3 Evolution II at extra cost. with the exception of the green-tinted windshield stripe. which was standard equipment. 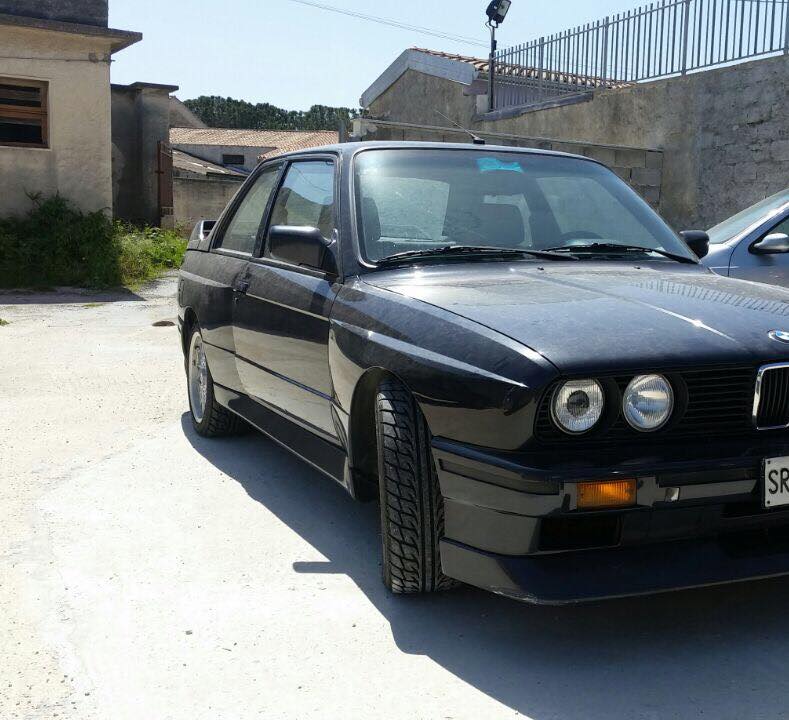 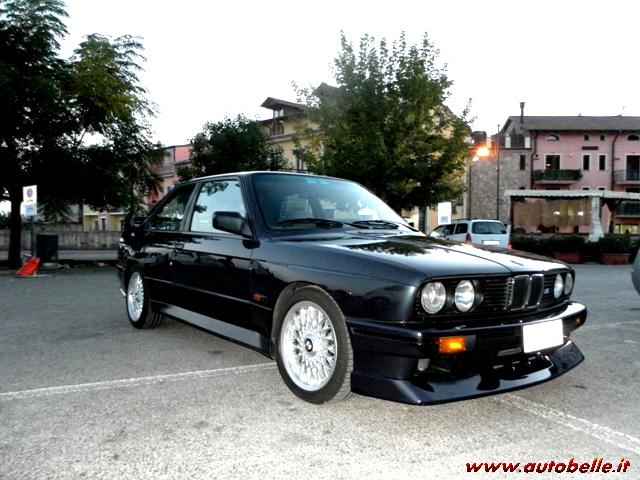 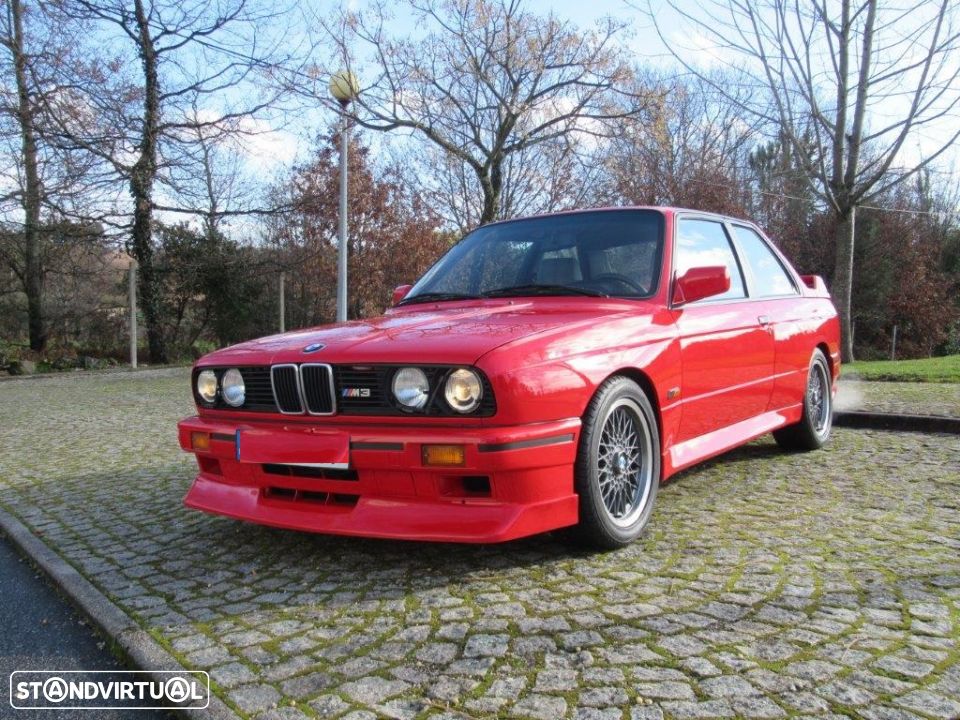